January 05, 2014
5 days into the new year and my first post of the year. If all goes according to plan, there should be at least 51 additional posts following by this time next year. Hopefully there will be a few more, but I'm learning to keep my goals modest.

And speaking of goals, I am now officially 1/3rd through the "Newbie" workout on +LynxFit. 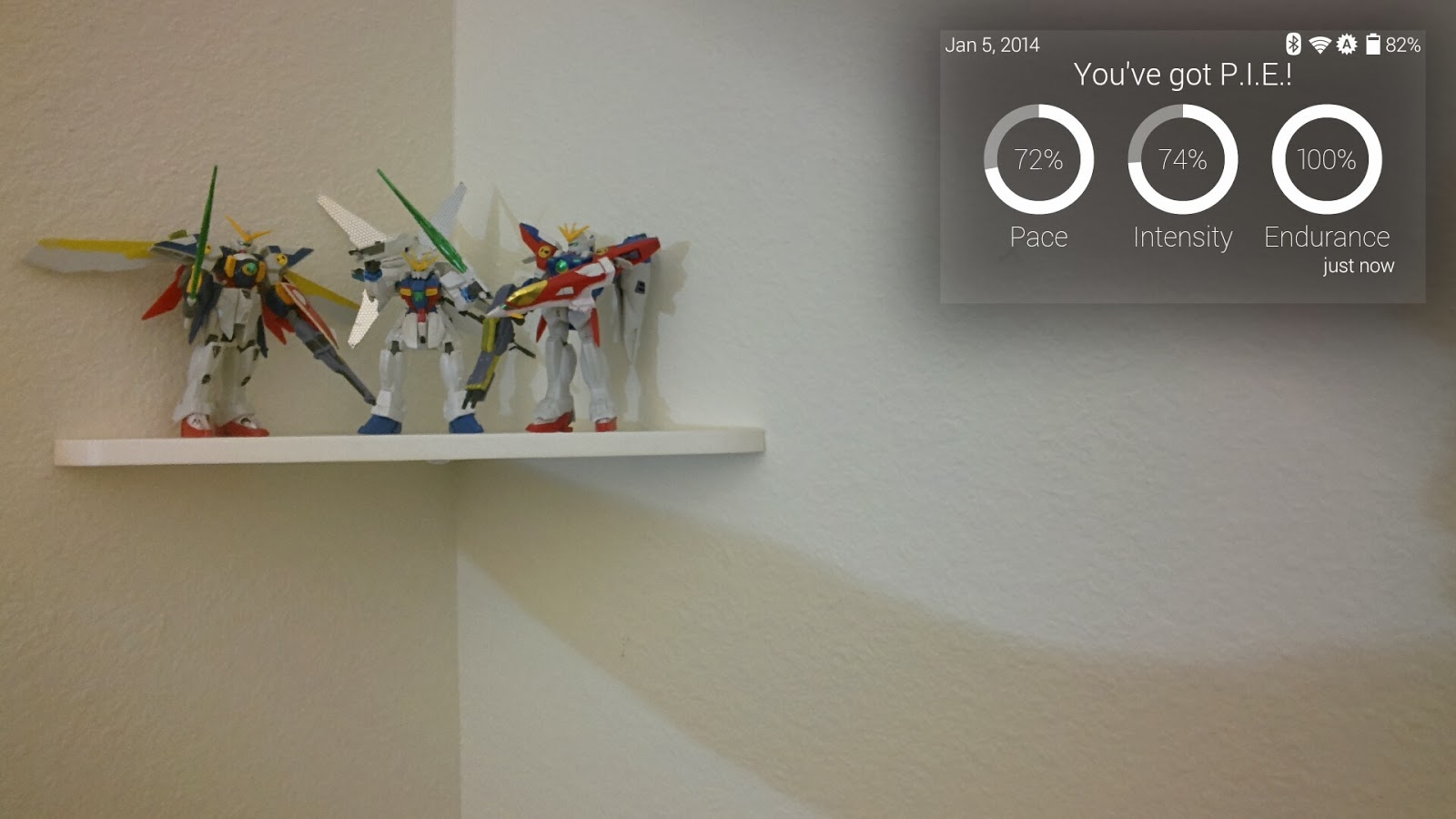 I know I've spoken of LynxFit and the work +Noble Ackerson and the team at Byte An Atom (no G+ page?) have been doing, and I'm sure you're tired of it by now, so I'll make an effort to only mention it again at milestone markers. This marker being 10 consecutive days of exercise. That is by far a record for me. Up until this point I had kept to a workout routine for  perhaps 3-4 sessions, maybe a week or two before I had to miss a session for one reason or another and once that happened it was a never ending flood of "I can just make up this session tomorrow, or the next day, or the next, etc." With this workout routine I can start wherever and whenever I want, meaning I don't need to tie myself to a specific time or place to keep to the regimen, which is working out great for me. The best part is I actually feel good afterwards and find myself looking forward to the workouts. In the past 10 days, not only have I kept up with my daily workout, I've also went for a 6+ mile walk and started attending the gym at work with some coworkers. Last Thursday I ran over a half mile at a 5 mph pace without needing to stop. That may not be great, but it's a great start. Overall I ran on the treadmill for about 2 miles. I'll be continuing to go to the gym during lunch each day and work on improving my endurance. Once it warms up outside we'll likely move to jogging around the pond instead. Our goal is to attend the Washington, DC Spartan Sprint this year, though we don't know the date yet (it's still pre-reg last I saw), but so long as it's not in the next two months, we'll be attending. If all goes well, we may continue training and work our way through the entire gauntlet, but let's see how this first one goes before getting too far ahead of ourselves.

The Android development class that I'm teaching also began last week. So far I think it's going well. All of the attendees seemed interested and we got everyone set up and ready to go (last weeks session was just about getting Android Studio set up and configured and going over some terms and general platform paradigms, etc). This week we'll be continuing with the application and adding a log in screen, connecting and authenticating with the web service, setting up some background services to handle pulling data down periodically from the server, and storing that data in a database. It seems like a lot to cover in one 2 hour session, but Android has come a long way in the past couple years and the templates and utility classes available dramatically reduce the time needed to get started. The login form alone is 95% completed just by adding one from the template library.

Around the time the Android class is completed I will be putting together a Dart class/session as well to go along with the other DartLang Flight Schools going on throughout February. Dart is a very interesting web language and I'm very interested to see where it goes, especially with Android. I was hoping that Go would become the next officially supported language on Android, but now I get the feeling that Dart will have that honor instead.

On another note, I will be sending my Glass in for the upgrade to XE-C soon. I expect to be receiving the box sometime this week. It will be sad to see my current unit go, but I'm also excited to be getting a fresh one back. It will certainly be a bit awkward without Glass for a week or so during the back and forth shipping, but I'll make due somehow. I'm more concerned that I'll get thrown out of my workout routine more than anything, but continuing to go during lunch should help to keep me motivated for that week where I become another of the populous living in this century rather than the next.

So far, I've had a great start to this year and I can't wait to see what the rest will bring.


Oh yeah, one more thing. I'm putting together a #GlassAndRelax the first weekend in March (the 1st actually) where we will be attending a Medieval Times show in the Baltimore area. I'm hoping for a large showing of +Google Glass Explorers, and so far we have around 10 committed to attending with several other maybes. I attended once before when my mom was visiting and we had a lot of fun. I have no doubt  we will have just as much, if not more fun. It will be very cool is we can put together an #autoawesome movie afterwards from all of our viewpoints.

Popular posts from this blog

Happy Holidays, Catching up before the New Year, and Family Visits

December 29, 2013
So, I'm a few posts behind. I hope you'll all forgive me for taking some time off to spend with family and friends throughout the holiday season. After my last post on the way down to South Carolina to visit my parents, brother, and as many friends as I could, I have been quite busy. First, I brought my mom back up to Maryland with us to visit for a couple weeks following Thanksgiving. We had a good time and she very much enjoyed her stay. The trip to Union Station so she could catch her train taking her back was a little sad, but surprisingly Union Station is a seriously awesome Metro/Amtrak/Marc station. It felt very much like a mall or a large airport. There were three levels with food, shopping, souvenir shops, and more. It was quite something else. Not to mention it was decked out in lights for the holidays so it looked even more amazing. So, to catch everyone up on what's been going on, what is going on, and what will be going on: Since the last post, I am now g
1 comment
Read more

Getting Fit, Glass and Relax, and Hacking Habits

December 29, 2013
A few weeks back  +Noble Ackerson  recommended a book that sounded interesting, but I didn't really want to spend the money on it at the time. That book was "The Power of Habit, by Charles Duhigg". Well, I received some Play Store gift card over the last few weeks due to being awesome at work and decided to pick it up. I haven't quite finished it yet, but I can without a doubt say that it will make you look at things in an entirely different way. You'll begin to recognize all the habits that you have and even the habits that your company has. The things that we do every day without knowing and without even questioning. It's astounding. One of the key aspects of the book though is that if you know and understand a habit, you can change it. I've started to utilize what the book details about habits to accomplish a few things that I've realized I want to do. First, I plan on utilizing the habit forming routines to get to the point that I exercise every
Post a Comment
Read more

Hackathons, Android Courses, and Catching up

January 26, 2014
Wow, what the hell? I look away for one second and I've already missed two posts? That's not a great start to the year... The Android class I'm teaching is  off to a great start though. So far we're 3 lessons in and have covered quite a bit. So far we've added new activities, created some helper classes, connected to a web service and pulled down data, as well as authenticated, created some settings we can save and load, set up a SQLite database, stored records to it, pulled them out, and then turned them into objects for us to see on the screen. We've adjusted the colors and properties of the items at run time and even created and utilized BroadcastReceivers, Services, and more. I'm impressed with what the class has absorbed so far, and what I've learned by preparing the class. I'm really enjoying it and the more Android development I do, the more I learn it's capable of, and the more I like doing it. In fact, our project for the hackathon I a
1 comment
Read more